Free Stock Footage and Animations for green and blue screen.  Dozens of clips to choose from, here!

You can really have fun with all these… 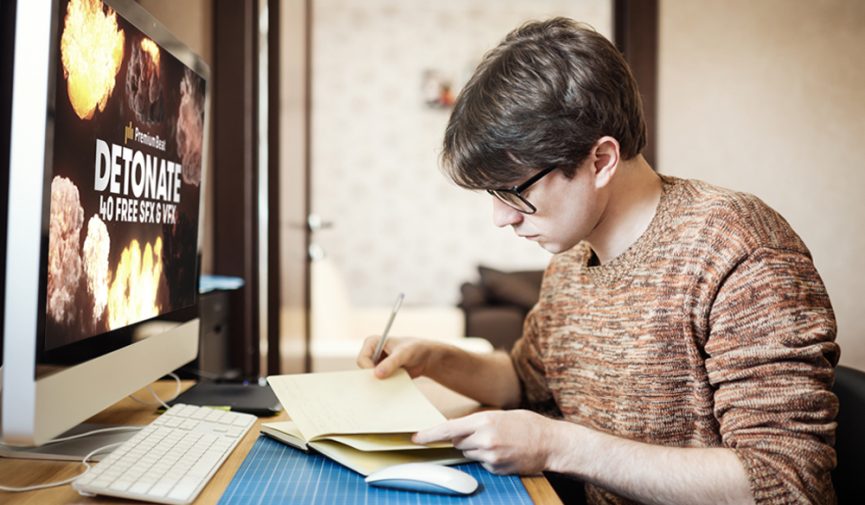 Download over 120 free video elements, assets, and sound effects for your next project. Good for personal or commercial use. Get your PB Freebies now!

The third annual PremiumBeat Free Week has come and gone, but you can still download over 120 free video elements that we gave away with these 5 new PB Freebie packs.

Download and use these free SFX and video elements in your next project, good for personal and commercial use. Download all five packs now!

Now is your chance to download 21 free 4K fog overlays to use in your videos and with your motion graphics. These overlays were all shot in a controlled studio environment and captured organically with real fog and haze. The only way to get a more realistic look is to shoot on a foggy day.

Final Cut Pro X is a huge leap forward for professional video editing. Powerful media organization features let you quickly browse, tag, and filter your files. The Magnetic Timeline offers customizable layouts and innovative editing tools that are designed for today’s all-digital workflows. And Final Cut Pro X is optimized for macOS and the latest Mac hardware, so you can enjoy incredible performance on portable and desktop systems.
Learn more

This advanced encoding companion to Final Cut Pro X lets you customize output settings, speed up your work with distributed encoding, and easily package your creations for the iTunes Store.
Learn more

MainStage is a live performance app that lets you take any sound from Logic Pro X to the concert stage. Build your set list using keyboard, guitar, and vocal effects that you can easily switch between. And perform with a huge variety of sounds using your favorite hardware controller.
Learn more

Note: After purchasing the Pro Apps Bundle for $199.99, you’ll receive an email with content codes that can be redeemed on the Mac App Store. Codes are usually delivered within one business day but may occasionally take longer.

Using Photoshop for your artwork is the way of the future! Not only can you remove mistakes with a simple hotkey, but you also don’t have to worry about the mess that is associated with real world watercolor. No longer do you require paper, water and colors. With Photoshop, everything is done with the power of computing. If you are a digital artist and are looking for your next masterpiece, consider using some of these great free watercolor design assets.

Installing Photoshop brushes and textures is a breeze. You can simply drag the ABR file onto your Photoshop window to install one brush. For a collection, head to edit>Presets>Preset Manager, select brushes and then add brushes by hitting the load button!

The Ink Matte Pack by CreativeDojo is a handful of ink mattes that make it simple and easy to achieve an organic yet stylized ink reveal effect. Use it to animate watercolors, spills, ink, and much more. The Ink Matte Pack works with After Effects, Premiere, Final Cut, and other applications that support track/luma mattes.

Be sure to check out a vast variety of inexpensive yet helpful and creative Dojo Scripts!

Looking for quick and very specific tutorials? Well, look no further! Quick Tip King is here to help tutor you in 90 seconds at a time. We’re starting out in Final Cut X (fcp 10.1), but soon we’ll be covering Adobe products and the rest of the Final Cut suite. So hit me up with any topics that you’d like covered and get ready to get your tutorials on!  For instance…

If you are a professional video editor or if you spend any amount of time in Final Cut Pro, you may be looking for a way to save time.  There are many ways to cut corners and/or use the keyboard to shave off seconds that add up to minutes later.  It is a good idea to develop efficient habits that pay off later.   Here are five tips to save time in FCPX that you probably aren’t using, but should!

Put Final Cut Pro to work for you.  Let it save time for you!  By taking just a few moments to set up a Smart Collection, FCPX will automatically categorize your files for you.  To watch a tutorial on creating Smart Collections click here.

Save time and clear out the clutter of your unused or unwanted clips by switching your event browser to show only your favorited clips.  Take the time while editing to hit that handy “f” button on your keyboard to favorite a clip.  It pays off later when you don’t have to look through the bad takes.  Check out the tutorial on the favorites view by clicking here.

Don’t export one file setting at a time!  Create a bundle folder in your share destination to render out your video into multiple formats or destinations at once.  Save time by uploading straight to YouTube and export a file to your hard drive with the click of a single setting.  See the tutorial on bundle exports by clicking here.

#2. Place Clips with the Keyboard

This tip is one that I personally use all the time but I have found that few other editors use it.  Using the keyboard to trim to the playhead is very fast and easy.   Stop using the blade tool, then selecting the part you want to remove, and then hitting delete.  Save time by trimming to the playhead to reduce your edit to one click.  It saves you 2 or 3 clicks per edit.  Now that may not sound like a lot but when you add up all those clicks over the lifespan of a project, we’re talking minutes!  Minutes! Maybe even hours!

Here’s the tutorial on advanced trimming.

Last week I received an email from Footage Firm, a stock footage company created by Joel Holland in 2001 when he was only 15 or so.  Looking towards the bottom of the page, I was delighted to discover that the company is located just two doors down from mine.  So today, our first Washington DC metro 85 degree spring day, I decided to take a little walk.  Not knowing who Joel even was before my impromptu visit, I didn’t know what to expect.  (I was mainly just stopping by to introduce myself, comment on their nice product line, and check out the joint!)  My first thought was that I was about to meet the traditional 60 year-old owner of a successful video company.  Boy, was I surprised…but gladly so as I told him.  Entrepreneur, Journalist, Speaker, and TV Host I discovered since our meeting.  His company, made up of (a mere) three others on his staff, was advertizing a new FREE set of After Effects Templates…a new product line.  Joel told me that his fan base told him to do so.  Footage Firm simply asked the question right on their homepage…”What do you want us to create for you.”  Already successful in a vast quantity of SD and HD footage bundles, and their semi-newly popular music and audio files, the new After Effects bundles (ten in all) was a new venture released on March 30, 2011 that Joel knew little about.  But the masses don’t lie, especially when asked directly.

But free you ask?  How is that possible?  When I asked Joel, he applied a simple and basic entrepreneurial law of attraction:  make a high quality product and make it cheap enough for everyone to purchase…including the basement video editors all the way up to the network TV channels.  Simply, build it and they will come.  And that’s exactly what I’ve done (as a basement and government video editor) and so has such channels as ABC, MTV, The Weather Channel, The History Channel, USA Network, Discovery, Nat Geo and the like (30,000 satisfied customers, his website states!).

So how did Footage Firm get its start?  According to Business Week, when Joel Holland was in high school, he advertised a short piece of video he’d shot as an amateur videographer on eBay to see if it’d sell. Someone bit. Holland has since turned his hobby into a $100,000 business that sells professional-grade footage of everything from U.S. landmarks to international locations to erupting volcanoes via a Web site or over the phone. But where competitors might charge $300 to $600 for 15 to 20 seconds of footage, Holland charges $149 for 30 to 60 minutes. His trick? He sells the reels in bulk form, and whatever shooting he can’t do himself, he contracts out to his cadre of professional videographers around the globe. Holland quotes BBC Worldwide numbers, stating that stock footage is estimated to be a $300 million market in 2006 and was poised to grow to $1 billion by this year. Even though he founded Footage Firm in 2001 and already counts Disney, ABC, CNN, Discovery, The History Channel, and E! among his clients, Holland started working with a consultant at Babson College, his Alma mater,  to develop a strategic plan to grow into a $500,000 company.

In 2006 Joel was named one of the “Top 25 Entrepreneurs Under 25” by BusinessWeek Magazine, and “Young Entrepreneur of the Year” by the United States Small Business Administration.  When asked about the secret to his success, Holland simply states, “I’m ignorant. I don’t really mind shooting for the stars because I’m too ignorant of failure.  Ninety percent of success comes down to confidence; nine percent is drive, and one percent is intelligence.”  Joel is on top of his game, referring to his online statistics and feedback from his website customers a number of times during our ad-lib talk.  He listens to them; they know what they want.  He has great plans for his company by continuing his wildly popular After Effects templates, expanding the music library, and coming up with new HD video bundles.  This guy, and his company, are going places–

Joel Holland, as an HD shooter on location for Footage Firm