Frame.io is the Collaborative Workflow Platform We’ve All Been Waiting For. Collaboration is a major part of filmmaking, but sometimes it seems as though technology hasn’t quite caught up with our increasingly mobile and online workflows.

Frame.io has stepped in to offer users something that incorporates all of the benefits of Dropbox, Vimeo, and email into a single platform. In other words, Frame.iowill allow you to upload videos, audio, and more, review the content with collaborators you select yourself, and communicate back and forth through internal messaging. You can use Frame.io in your favorite NLE and After Effects too!

If you want to see the Frame.ioworkflow in action, head on over to its website. Get a free 30-day trial of Frame.io here!

No software to download and entirely browser based… just drag your image into the dropspace here, and jpeg.io will convert it into a progressive JPEG
and then optimize it using an advanced JPEG optimization technology.

Jpeg.io is a free online interface for rapidly and conveniently converting your images into highly optimized JPEGs using Kraken.io’s proprietery JPEG optimization algorithms. It has been engineered with simplicity in mind: simply drop your image into the drop space and a short time later you’ll get a progressive JPEG compressed to the smallest possible size without perceptible quality loss.

Give it a try and see it for yourself. 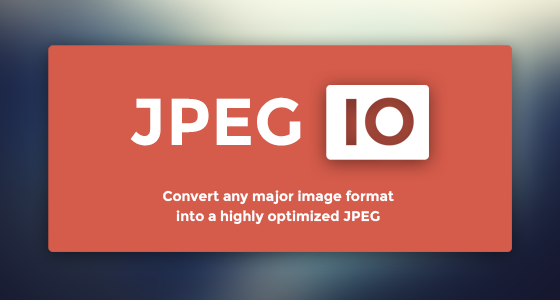 (Thanks to Robbie Carman of Amigo Media for the heads-up on Frame.io)

Collaboration is a major part of filmmaking, but sometimes it seems as though technology hasn’t quite caught up with our increasingly mobile and online workflows. That’s why Frame.io is so exciting. This collaboration platform aims to “pick up where Vimeo left off” by allowing users to upload, review, and share videos privately with collaborators anywhere in the world with a single application. And once you check out the workflow, you’ll wonder how you ever did without it.

Frame.io acts as a home base for all your creative projects. It replaces the hodgepodge of using Vimeo, Dropbox, and Gmail to work with media files online. We solve cloud storage, client review, transcoding, and light asset management into one seamless app. We have great tools for video like time based comments and annotation so you can draw directly on video frames. We have version control and comparison tools built in so you can see what’s changed over time. Frame.io is social too. Every action performed is tied to an individual user and tracked so you get notifications about what’s going on. It’s built for teams from the ground up so you can create a private workspace for each project you’re working on and decide who has access to what.

Frame.io allows you to create projects, add collaborators to them, and drag and drop files from your computer to share all within the dashboard, which is a real time-saver.

Click here to try Frame.io and to read a lot more on this collaborative tool for video creators.

As any Dropbox user knows, it’s pretty easy to share a cloud-stored file with someone; just click the share icon to get a link you can distribute as needed.

Ah, but what about the other way around? What if someone wants to send a file to you via Dropbox? Unless they have Dropbox accounts of their own, they can’t.

Now they can. FREE Browser-based Dbinbox enables Dropbox sharing in the other direction: It generates a custom link that others can use to send files to your Dropbox.

All you do is type in a desired user name, then click Link with your Dropbox. You’ll have to give Dbinbox permission, of course, after which you’ll find a newly added Dbinbox folder inside your Apps folder.

Now, just hand out your custom Dbinbox link. When someone uses it, he or she can drag and drop files right to the browser window or use a file selector. There’s even an option to send a message (which gets delivered as a text file), a nice touch.

For a little added security, Dbinbox lets you create an access code you can require users to enter before sending files your way.

This is a great little service that overcomes one of Dropbox’s hassles—few and far between as they are. There’s no charge to use it, though the developer does accept Bitcoin donations.

Click here to go to the original article on PCWorld.

Spotdox is a nifty combination of a Mac app and a Web service that lets you remotely move any file on your Mac to your Dropbox folder, thus making it available via Dropbox from anywhere.

Spotdox is an add-on to Dropbox that allows you to access any file on your computer (or any drives attached to it) from any location or device.
Never get stuck without that important file or folder.

Why do I need Spotdox?

Dropbox only gives you access to your files within your Dropbox folder. Spotdox allows you to browse, copy, and send, ANY file or folder on your computer to anyone or anywhere.

Now you can move stuff off Dropbox and onto your Mac from any phone or web browser. For instance upload photos while on the road to Dropbox and transfer them to your Mac, freeing up space.

We could use your help to spread the word, so for a limited time:

We are looking to get people using Spotdox, and providing feedback… so for the first 10,000 users we are offering a lifetime free Spotdox membership. Oh, and feel free to give us your feedback so we can continue to improve.

Thanks,
Tom and James

If you happen to follow me on Twitter, you were no doubt privy to the barrage of tweets I did while at the LACPUG meeting on Jan 23. Dan Lebental was showing off this cool editing app for the iPad, TouchEdit, and I live tweeted interesting points he made, and pictures I took.  I’d like to go a bit more in depth here.  More than 140 characters for sure.

The reason this app came about is because Dan bought an iPad and when he moved the screen from one page to another…he went “hmmm, there’s something to this.” And then he would browse through his photos, moving them about with gestures of his hand like he would if he was holding them, and he said, “hmmm, there’s something to this.” Eventually he figured out that this could mimic the tactile nature of editing film. Being able to grab your film strips and move them about, and use a grease pencil to mark your IN and OUT points. So he went out and found a few people to help him develop this. No, he didn’t do it on his own, he went through about 14 coders (if I’m remembering right) to eventually come up with version 1.o of his software.

TouchEdit works on any model iPad 2 or higher…including the iPad Mini. And it will be available for a price of $50.

Who is this for? Click here to read the rest of Mr. Ross’ article.

File-syncing service Dropbox is magical—even if it’s got a fresh new competitor. It syncs files between your computers and the web hassle-free… except when the file’s taking too long to sync. If you’ve ever stared impatiently at Dropbox, waiting for a file to sync, there’s likely an easy solution.

By default, Dropbox automatically limits your file upload speeds, presumably to avoid eating up too much of your bandwidth at one time. That’s nice of them, but the automatic upload rate wasn’t running nearly as fast as I’d wanted, which meant large files were taking forever to sync. The fix is simple:

On Windows, Click Dropbox in the system tray, then Preferences > Bandwidth; on Mac, click Dropbox in the menu bar, then Preferences > Network > Bandwidth > Change Settings. Once there, change your Upload rate to “Don’t limit”, or if you’re familiar with your network’s upload bandwidth and want to exercise a little more control, pick an upload limit that you’re comfortable with in the Limit to field.

You can likewise tweak your download speeds if you so please. It’s a small, simple tweak, but if you’ve been unhappy with your Dropbox syncing speed, it could make all the difference.

I use Dropbox to sync files across my Macs, but also to collaborate with others using shared folders. One day, I discovered that the disk space on my MacBook Air had dropped substantially. I started poking around, looking for swap files and other usual suspects, but eventually found one especially large folder hidden inside my Dropbox folder: .dropbox.cache.

Looking inside this folder, I found that it contained three dated folders, one each for the past three days. Inside each of those were a number of files; many, I could tell, were from my shared project folders. Because we use a versioning system on one of those projects, I could see multiple versions of many files. In all, I found 8 GB of cached files.

On a desktop Mac, that many files wouldn’t be a big deal. But if you have a MacBook Air, in particular, without a lot of disk space to spare, it could be an issue. So, if you see yourself running out of room on your hard drive, check that folder and delete files that you know you don’t need.

To do so, you need to be able to see hidden files. If that option isn’t already turned on, open Terminal and enter the command defaults write com.apple.Finder AppleShowAllFiles YES. That done, restart the Finder, either by issuing the command killall Finder in Terminal or by holding down the Option key as you Control- or right-click on the Finder icon in the Dock and selecting Relaunch Finder from that contextual menu. To hide those files again, enter the command defaults write com.apple.Finder AppleShowAllFiles NO and again relaunch the Finder.

Today, we’re really happy to announce that we’ve doubled the amount of free space you get for inviting friends to Dropbox!

How much space is that, exactly? For every friend you invite that installs Dropbox, you’ll both get 500 MB of free space. If you’ve got a free account, you can invite up to 32 people for a whopping total of 16 GB of extra space. Pro accounts now earn 1 GB per referral, for a total of 32 GB of extra space. Have you already invited a bunch of people? Don’t worry. Within a few days, you’ll get full credit for every referral that’s already been completed. Boom!

Once upon a time, we noticed that Dropbox spread fastest via word of mouth. We’ve always believed that sharing is caring, so we rolled out this referral program to make recommending Dropbox an even sweeter deal. Back then, we gave out only 250 MB per invite. Then we doubled the space for students for inviting friends, and they liked it so much we decided to give it to everyone!

Here’s a quick guide to getting the word out:

Once you’ve invited your friends, you can check in on your referral status here, and encourage them to download and start using Dropbox.