From Wikipedia, the free encyclopedia

FFmpeg is a free software project consisting of a vast software suite of libraries and programs for handling video, audio, and other multimedia files and streams. FFmpeg is the leading multimedia framework, able to decode, encode, transcode, mux, demux, stream, filterand playpretty much anything that humans and machines have created. It supports the most obscure ancient formats up to the cutting edge. No matter if they were designed by some standards committee, the community or a corporation. It is also highly portable: FFmpeg compiles, runs, and passes our testing infrastructure FATE across Linux, Mac OS X, Microsoft Windows, the BSDs, Solaris, etc. under a wide variety of build environments, machine architectures, and configuration (if you don’t mind learning the coding, that is…)

Read more and download free, here and at: https://www.ffmpeg.org 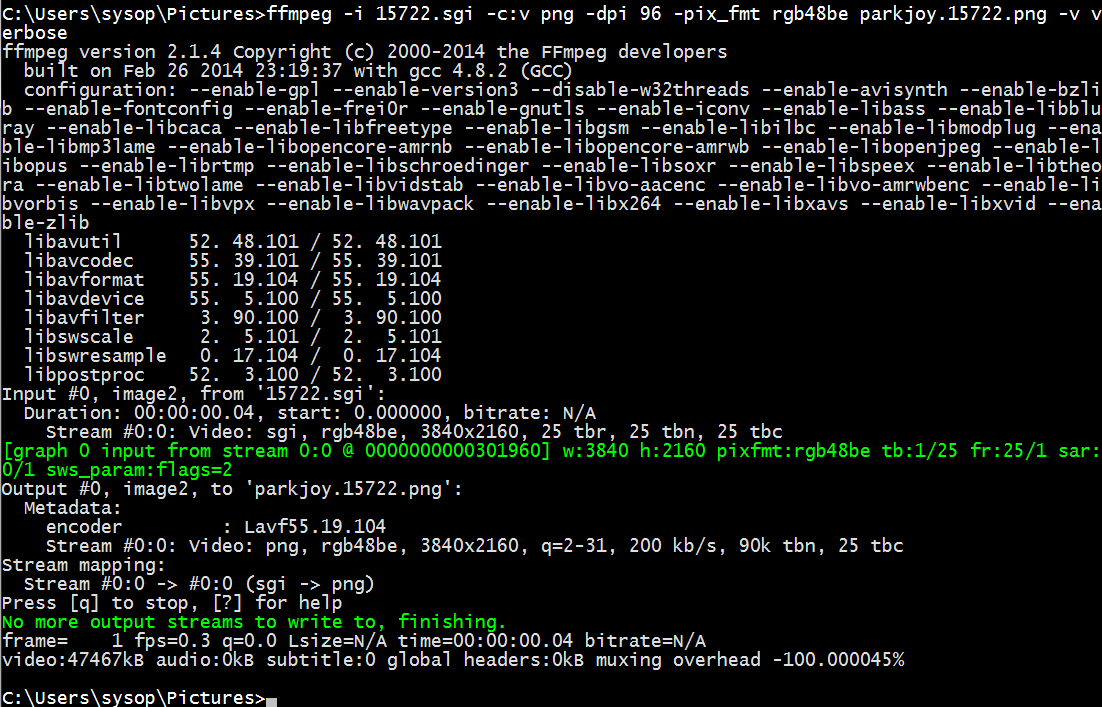 It happens about every decade, and the third one is almost upon us: A new standard for video compression, bound to make video shipping better.

It’s called “HEVC,” for “High Efficiency Video Coding.” You’ll see it demo into the industrial mainstream at the 2013 Consumer Electronics Show in January, and into your handhelds and TVs a year hence from that.

The skinny (heh): Another doubling of how much video can be stuffed into the same space as what’s stuff-able using today’s best compression techniques. Or, it’s a way to send the same stream with more bits. More bits, better quality.

HEVC improves upon H.264 (also known as “AVC” and “MPEG-4”), which improved on MPEG-2, the granddaddy of digital video compression, dating back to the earliest digital set-top boxes (circa 1995).

Who benefits most: Mobile carriers, already vexed with trying to keep up with how much video we’re shipping to each other from our camera-bejeweled handhelds.

Another potential beneficiary: Over-the-top video providers (think Netflix, Amazon, Hulu, etc.), which will likely opt for the “more bits” stance. Capacity? Eh! To them, bandwidth is free. Why bother with conservation?

No reason the home team can’t look happily upon HEVC, too. With the pursuit of “all-IP” (Internet protocol) networks comes the ability to harness the goods of that world. HEVC isn’t by definition an “IP thing,” but it’ll play sooner and with more gusto on the IP side of the plant.

So instead of encoding the entire yellow wall, frame to frame, HEVC can “mark” it for reconstitution as such on the end screen (“yellow wall here,” in a gross oversimplification)

The trade-off is computational intensity — up 35% to 50% — particularly on the decode end: TVs, handhelds. But computational complexity is symbiotic with Moore’s Law; processors are already 10 times stronger than they were when MPEG-4/H.264 came out, 10-ish years ago.

Stumped by gibberish? Visit Leslie Ellis at translationplease.com or multichannel.com/blog.

“H.265 will be designed to support new, still to be created video delivery and streaming technologies from day one, including devices working at 4K and Ultra HDTV (also known as 8K or 4320p) resolutions. Just to put things in perspective, the Ultra HDTV definition contains about 16 times the amount of pixels present in a 1080p video stream.”

Just got a new, shiny 50” Full HD (1080p) TV set for your home video needs? Prepare to purchase something newer, shinier and with a much, much higher resolution soon. The Joint Collaborative Team on Video Coding reached a new milestone for the H.265 video codec during the past week, and is about to unleash the new “monster” video standard within the next year.

The H.265 video codec, also known as High Efficiency Video Coding or HEVC, is being designed to replace the current H.264 standard used for high definition and Full HD (1920×1080) video encoding and decoding. The Joint Collaborative Team, a collaboration effort between the Motion Picture Experts Group (MPEG) and ITU-T, has just achieved a “committee draft” in a meeting in San Jose.

The new video standard is expected to provide a huge difference in data transmission and streaming efficiency compared to the previous one, with one of the speakers present at the meeting suggesting a 67% improvement.

H.265 will be designed to support new, still to be created video delivery and streaming technologies from day one, including devices working at 4K and Ultra HDTV (also known as 8K or 4320p) resolutions. Just to put things in perspective, the Ultra HDTV definition contains about 16 times the amount of pixels present in a 1080p video stream.

Before appearing on the market as a proper video standard, H.265 will have to achieve two more milestones: the draft international standard meeting is expected to be held within six months from now and the final standard ratification should arrive in January 2013.

New Squeeze 8 Lite
Available for the first time, Sorenson Squeeze 8 Lite enables the rapidly expanding market of web developers, videographers and other content creators who are focused primarily on online publishing to cost-effectively encode and transcode in the most popular video formats, including Flash FLV, Flash SWF, MPEG-4, QuickTime, Windows Media, WMA, WebM and others. This streamlined version of the software enables single file encoding to the highest standards with the ability to still use popular settings and filters available in Sorenson Squeeze.

“Sorenson Squeeze 8 Lite brings the power of Squeeze encoding to a larger population of users at a significantly reduced price,” said Morford. “As video consumption continues to grow exponentially online and across a multitude of mobile devices, we recognize there is a growing segment of users who want and need the ability to easily publish the highest-quality video online, but who do not need the full features an enterprise or broadcast professional might need. Quality is credibility, and Squeeze 8 Lite gives more users the ability to fully engage viewers and deliver the best possible online video experience.”

About Sorenson Media
Sorenson Media is an award-winning provider of the highest quality, differentiated video encoding solutions. With highly scalable cloud- and server-based encoding solutions and desktop applications, Sorenson Media empowers the enterprise and video professionals to easily and cost-effectively encode, transcode, manage and deliver the highest-quality video online and to mobile devices. Since 1995, Sorenson Media has been at the forefront of bringing online and mobile video into the economic and cultural mainstream. As video rapidly proliferates online, businesses and video professionals increasingly rely on Sorenson Media’s innovative solutions and legacy of trust to meet their evolving needs.

Sorenson Media announced the immediate availability of Sorenson Squeeze 8, which adds enhanced functionality and ease-of-use to the company’s gold-standard video encoding and transcoding application at a lower price point. In addition, the company has also introduced Sorenson Squeeze 8 Lite, which makes select features of Squeeze 8 accessible to prosumers at a further significantly reduced price.

Adaptive Bitrate Support for Most Popular Formats. A major improvement over Squeeze 7, this latest release now includes optimized performance for all three leading adaptive bitrate streaming platforms: Adobe Dynamic Streaming; Apple HTTP Adaptive Streaming; and Microsoft Smooth Streaming. The unique adaptive bitrate support automatically transcodes each individual video file into multiple, chunked segments in a full array of bitrates, organizes these segments into a folder, and delivers them to the specified destinations for playback on any device. This process simplifies and streamlines workflows by eliminating unnecessary tools and steps required by other applications.

Full x264 Support and Optimization. In addition to being the current quality leader for encoding using the MainConcept H.264 codec, Sorenson Squeeze 8 is one of the first commercial video encoding applications to include full support for the increasingly popular x264 codec. This new support opens thex264 codec in a way that has never been done before, employing an intuitive user interface, complete with in-product instructions that enable video professionals to easily adjust and optimize up to 48 major encoding parameters, including key frame rates, encoding modes and performance, to adapt the popular H.264 format to their needs and workflow.

Ease-of-Use. In addition, Sorenson Squeeze 8 re-thinks the user experience and includes new features to improve the overall ease-of-use of the application and give users greater control of their videos, including:

“Sorenson Squeeze 8 packs more punch than ever, in two versions with significantly reduced prices. It truly expands our tradition of innovation leadership in the encoding and transcoding arena – and of anticipating and meeting the needs of every type of user, from the individual to the enterprise,” said Randon Morford, Squeeze product manager for Sorenson Media. “The full product’s integration with Squeeze Server moves the most painful and time consuming encoding tasks to a separate server, freeing up the productive capability of the computer and allowing users to focus on more strategic tasks, while our x264 optimization tools provide greater control than ever over all the key encoding parameters of H.264.”